Manchester is one of the fastest growing cities in Europe with a great history and home to two premiership football teams. Manchester has the third largest economy in the UK and is the third most visited city after London and Edinburgh. We couldn’t possibly list all the achievements this great city has contributed to the North west but following the industrial revolution Manchester has under taken its own revolution in recent years with continuous development within the city pushing social and economic boundaries as well as increasing larger buildings and developments pushing the city centre boundaries into the suburbs. The once great industry’s making way for great leisure facilities as well as many great new tech and innovative businesses such as Boohoo, Autotrader, Laterooms.com, Onthebeach, socialchain, talktalk, Ukfast. Aldermere, Together finance, foot asylum and many many more.

Manchester shopping is a great experience within the city centre along with the Trafford centre and Lowry centre close by. Theatres, bars and nightlife give so many options you are spoilt for choice with new bars and eateries opening on virtually a daily basis. Social activities such as the theatres, the national football museum, Chill factor, treetop trek at Heaton park, art galleries, museums and many other places of bursting with things to do.

Manchester University is a massive provider of further education that attracts many outsiders from afar including overseas and many choose to stay and become adopted Manc’s because of the warm welcome and opportunities offered.

Manchester contribution to the music scene shouldn’t be missed The bee gees, Herman Hermits, New Order, The Smiths, The Stone Roses and last but not least Oasis.

Based in the North East of Manchester within easy reach of Manchester city centre via public transport for the 3 mile trip. The shops on Moston Lane along with the nearby Harpurhey shopping centre with a busy local traditional market and a Asda and Lidl supermarket.

Surrounded by Broadhurst park, Bogart hole clough and Moston vale bringing open space to a largely built up area. Hough hall on Hough end Road brings the history to the area built in 16th/17th century with the FC United of Manchester bringing competitive sport into the area along with small local football teams and Broadhurst bowling club. The area has a lot to offer and being within close proximity of the ever increasing city centre of Manchester there ae plenty of employment possibilities. 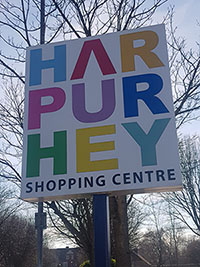 Has a vibrant shopping centre offering Asda, Greggs, Subway, Wilko’s and B&M as well as many other well-known names. The local market days along with the internal food halls add to the great shopping experience. The local Bingo hall is a firm favourite within the shopping centre with Manchester colleges Harpurhey campus close by offering many courses and with the local north Manchester fitness centre offering access to swimming and many other facilities.

First mentioned in the Doomsday book and voted as one of the top 10 places to live in greater Manchester (2014) situated with easy access to Manchester city centre offers mixed housing of all types, age and size. Heaton Park one of the largest parks in Europe offers great facilities with endless days of fun a possibility.

Home to the late Comedian Bernard Mannings World Famous Embassy club that played host to many acts including the Beatles and previous home town of Jon Macken, Wilf McGuinness, Joe McIntyre and Roger Byrne all in the memories of many football fans.

Just 4.5 miles away from Manchester City Centre and 5 miles away from Rochdale the 45,000 plus population have there own Middleton Arndale shopping centre complimented by a large Asda. Close to Junction 19 of the M62 and junction 21 of the M60 offers great transport links along with Middleton bust station offering many routes to Manchester City centre, Bury, Oldham and Tameside. The £13 million Middleton Arena opened in 2009 and offers great sporting facilities. Willow park recently built homes by Keepmoat on the Langley estate bringing a fresh feel to the old overspill Manchester council estate of 1950s. These many council homes having been bought by the residents with the right to buy along with the new homes brings Middleton more up market but with still many characteristic red brick terraced homes. Hopwood hall offers further education facilities for those moving on from the many local schools in the area. The local Greengate and brookside business parks and JW Lees brewery bring employment to the area.

The historic Tonge Hall and Alkrington Hall bring history to the area along with the St Leonards church built in 1524 and the Old Boars Inn which parts of the building dates back to 1500.

Just 3.7 Miles to Manchester City Centre and 3 Miles into Oldham with great transport links provided by bus or Tram and great motorway links is home to a population of over 23,000. This Former Mill town with its historic Failsworth pole historically was home to a cottage industry making silk hats the eventually moved into the many mills that are now occupied with the electronic industries of Russel Hobbs and spectrum. One of the many mills is now home to the Ivy Business Centre offering space and work facilities to many new and established businesses in the area. Daisy Nook country Park much owned by the national trust offers ideal walks and picnic areas away from the hustle and bustle of the local supermarkets of Morrisons and Tesco.

Just over 2 Miles away on the North East side of Manchester city centre Newton Heath is home to a population of around !3,000 people. Home to the original Manchester United Football club formally known as Lancashire and Yorkshire railway football club. Brookdale park and Clayton vale offers open spaces and the local shopping centre provides shopping at Iceland and Asda.

Clayton lays on one of the main routes into Manchester City centre with fantastic transport links by bus or tram into the bustling heart of entertainment, shopping, business and education facilities as well as many other things and places of interest. Manchester velodrome home to the British Cycling team is one of the central points with bike hire available to try the track out or to go along the mountain bike riding track through the picturesque Clayton Vale. The old chemical works has been demolished to make way for the Manchester City training ground. The former commonwealth games stadium now Manchester City’s Etihad stadium built on the former Bradford coal Pitt forms part of the sports city complex with new colleges, libraries and ever increasing improved facilities. There are many shops along the Ashton old road with the area serviced by many supermarkets.

Further along the Ashton Old road leads to Tameside and the area of Droylsden The area being much improved with a new marina and a very large new housing development to complement the many 1950s type semi-detached property’s. The area around the marina will eventually be home to bustling restraints and bars. In years gone by the famous Christie’s towels were manufactured here until the late 1980s the site was later demolished and replaced with a Tesco supermarket which is complemented by the Droylsden shopping centre with many high street names having a presence. Sports facilities are provided at the Medlock Sports centre The tram line runs through Clayton to Manchester City centre or out into Aston under Lyne. The former colliery at the snipe provides further shopping with B&Q and many home improvement stores. Road links onto the M60 ring road giving great transport links means that industry based on the rest of the former colliery site gives way to distribution centres and many businesses creating great employment prospects. The location provides easy access to Manchester city centre and also to the Ashton under Lyne leisure area that houses many eateries, bowling and cinemas.

Historically home to the old famous Belle Vue Zoo and Funfair, still home to the dog racing track (maybe not much longer as planning permission for homes have been applied for) a new Speedway track, great shopping and Gorton Market gives this area of much multi-cultural society a great feeling of local excitement. Houses of many types, size and prices are available. Local buses transport many into the city centre within 10 minutes to enjoy the city’s many attractions.

The former home to John Thaw of television detective fame and Paul Scholes and Tommy Johnson of football fame there have been many changes to the area with the new housing estates in West Gorton built on the former estate that the programme “Shameless” was filmed. The restoration of Gorton monastery is a great tale of bringing an old building to a new use and is well worth a visit.

Siting on Ashton Old Road is Openshaw once home to great industries such as GEC switchgear, Crossley Brothers and Manchester steel is now undergoing massive improvements after the demise of these great industry giants. Now home to a Lime Square shopping centre, many housing developments as well as Smithfield Market. Home to Greggs bakery and distribution as well as Sheldon’s bakeries these well-established employers are joined by many new and established employers on the new City Works industrial complex. Great transport links to Manchester and Ashton City centre this area is undertaking great transformation with Manchester College Campus and schools such as Wright Robinson college providing education for 1800 pupils in the area. This school was built at a cost of £53 million and being the most expensive school ever built in Europe provides great up to date resources.